Thousands of screaming fans, being asked to sing the national anthem at a major league baseball game and a parade: It was all too much for “American Idol” finalist Danny Gokey, who returned to his hometown of Milwaukee last week. 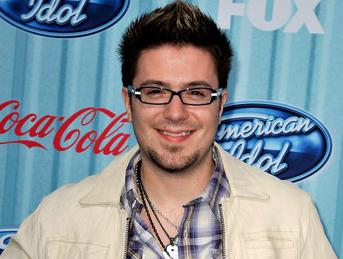 During the parade, the 29-year-old truck driver cried.

The 29-year-old Gokey, who was voted off Wednesday, said he was grateful to the show and that his “life has turned around: I can’t say that enough.” With the vote, “Idol” now pits dark horse Kris Allen against early favorite Adam Lambert.

Gokey has come far in his transformation from an unknown widower to the third-place finisher on the popular Fox singing show.

“From tragedy to triumph,” he said.

Less than a year ago, Gokey’s wife of 12 years, Sophia, died after surgery for a congenital heart defect. He was so shocked, he couldn’t cry at her funeral.

Sophia had been an “American Idol” fan, and they had agreed he would try out. Gokey, then 28, reached the upper age limit for the audition, but a month after her death, he auditioned in Kansas City.

Gokey, a volunteer church music director who knows mostly gospel music, had to learn new songs every week. He also tailored his image, turning his collection of more than 50 pairs of funky glasses and the heart symbol he makes with his hands into his signatures.

He has said he decided long ago to put away bitter feelings and enjoy life, which recently included being tutored by actor and singer Jamie Foxx, complimented by Simon Cowell as “one of the best” and adored by Paula Abdul, who cried when he was voted off the show.

“My whole testimony is overcoming,” Gokey said. “Overcoming the impossible in my life, and now I want to take that message and tell people, ‘If I can do it, you can do it.'”

Gokey plans to take that message on the road this summer when he tours with the show’s top 10 finalists and in charity work for Sophia’s Heart Foundation, which he started after his wife died. He said he also wants to make a rhythm and blues CD, although he hasn’t yet signed a record deal.

Gokey’s 34-year-old brother Charles said his family was devastated by the vote, but that Gokey was now free from “Idol” contracts to do what he wants, including volunteer work.

“I’m a little sad, but at the same time it’s a new beginning,” said Charles Gokey. “It’s a happy beginning for what he can accomplish, with all the exposure he’s had.”

“I was a nobody, and this show turned me into somebody and I’ll always be thankful for the roots that I came out of because I do believe that still the best has yet to come for me,” Danny Gokey said on a recent conference call with reporters. “This is not the end of the road.”