David Beckham’s father Ted is on the road to recovery as he has regained consciousness after suffering from a heart attack earlier this week. 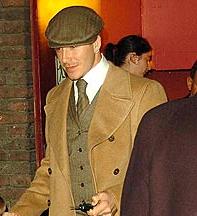 The 59-year-old gas fitter was rushed to Whipps Cross Hospital in Leytonstone, London, on Wednesday and later transferred to the London Chest Hospital in Bethnal Green, where he is now said to be in a stable condition.

The LA Galaxy soccer player flew in from Los Angeles on Wednesday and was joined by his wife Victoria on Friday afternoon.

Although Beckham Snr.’s health is gradually improving, it is not known when the celebrity couple will return to the U.S.

Simon Oliviera, the spokesman of David Beckham, revealed, “It’s too early to say how long David and Victoria will be here. They will stay as long as it takes and as long Ted needs them. He is conscious and talking, and that’s a positive step.”