X Files star David Duchovny and his actress wife Téa Leoni have split up after he discovered explicit text messages on her mobile phone sent by actor Billy Bob Thornton. 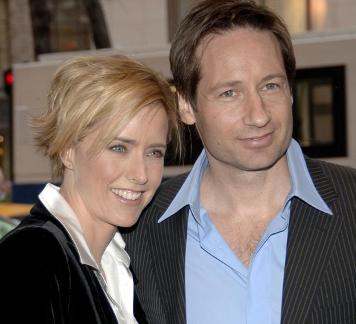 Just two months after Téa, 42, encouraged her ‘sex addict’ husband to check himself into a rehabilitation clinic the couple are separating after 11 years and two children.

Through text messages on his wife’s mobile phone David Duchovny discovered she had begun a relationship with Oscar-winning actor Billy Bob Thornton, 53, who was formerly married to Angelina Jolie.

Five-times married Billy Bob met Téa when they made a comedy film together earlier this year called Manure.

Billy Bob Thornton, who is a musician with his own band, has been seen with Téa at his gigs.

A friend of the couple revealed: “She even helps him load and unload his truck.”

Thornton, who starred as the U.S. president in “Love Actually”, has three children by his various wives, and a four-year-old daughter by his current girlfriend, Connie Angland.

But he is reported as saying that he won’t wed again because marriage ‘doesn’t work’ for him.

It was Téa Leoni, who persuaded her husband to receive treatment for ‘sexual compulsion proclivity’ at the Meadows clinic in Arizona, followed by further treatment at the Keystone center in Pennsylvania.

The spokeswoman of Téa revealed: “Yes, they have separated. She is living on her own with the children in New York, but we did not want to announce it for the sake of the children until after David had received treatment for his problems.”