Republican John McCain and Democrat Barack Obama face off in their final debate on Wednesday, as McCain hopes for a strong performance to change a White House race that could be slipping away. 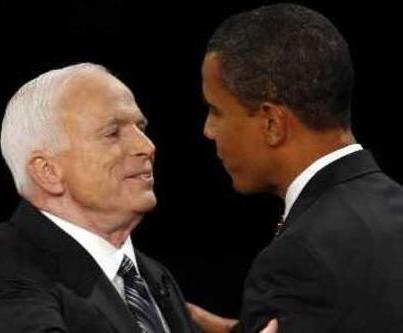 Three weeks before the November 4 election, McCain is running out of chances to reverse his slide in national opinion polls and gain ground on a surging Obama.

The 9 p.m. EDT encounter at Hofstra University in Hempstead, New York, will be the third and last debate between the presidential contenders and their final opportunity to reach a television audience of 60 million or more.

Katon Dawson, who is South Carolina Republican Party Chairman, revealed: “You can do yourself a lot of good when you have a debate with that many people watching.”

The debate comes as new opinion polls show Obama gaining strength nationally and in battleground states after weeks of economic turmoil and plunging stock markets, with more voters saying they trust Obama’s leadership on the economy.

A Reuters/C-SPAN/Zogby poll gave Obama a 4-point edge over McCain, but other national polls showed a larger margin for the Illinois senator. A CBS News/New York Times poll that showed Obama leading by 14 percentage points was the fifth survey this week to register Obama’s lead in double-digits.

The bad poll news heightened the debate stakes for McCain, who unveiled a package of measures on Tuesday to help investors, particularly older Americans, who have seen their retirement savings decimated by stock market losses.

But McCain also said he was not finished talking about Obama’s service on a community board in Chicago with former 1960s radical William Ayers. The Arizona senator said he was likely to talk about Ayers during the debate.

Ayers was not discussed in the last debate, although McCain had been talking about him on the campaign trail. After the last debate, Obama noted McCain’s reluctance to discuss the issue with him directly.

During an interview with KMOX radio in St. Louis, Missouri, revealed: “I was astonished to hear him say that he was surprised that I didn’t have the guts to do that. I think he’s probably assured that it’s going to come up this time.”

John Zogby, who is a pollster, revealed: “There is no question the negative campaigning just isn’t working. To make an impact in this debate, McCain needs to be proactive and be very specific about the way he would lead an economic recovery.”

At a New York fundraiser with running mate Sarah Palin on Tuesday night, John McCain told cheering supporters: “I want to do about half as good as Sarah did against poor old Joe Biden.”

Polls showed most voters thought Joe Biden, who is a Delaware senator and the Democratic vice presidential nominee, outperformed the first-term Alaska governor in their lone debate.

The presidential debate will focus on domestic policy and the economy. Obama and McCain will be seated at a table with moderator Bob Schieffer of CBS News instead of standing at podiums as in the first debate.

Meanwhile, uncommitted voters named Barack Obama as the winner of the third and final presidential debate by a large margin, according to a CBS poll.

Both candidates are viewed similarly on sharing voters’ values, but Obama increased a bit more than McCain did after the debate.

Forty-six of the uncommitted voters said that their image of Obama changed for the better as a result of this debate. Just 10 percent say their opinion of Obama got worse, and 44 percent reported no change in their opinions.

McCain’s image improved, but not nearly as much. Thirty percent said their image of him improved as a result of the debate, but nearly as many – 26 percent — said their views of him are now worse than before.

Debate watchers who thought Obama won the debate thought he was a better communicator and has a better grasp of the problems the country has to face. Some used words like “eloquent” and “confident” to describe him. In contrast, some said McCain was defensive and spent too much time attacking Obama – using words like “rude,” “mean,” and “caustic” to describe McCain’s performance in the debate.

Debate watchers who thought McCain won the debate were impressed by his experience, and many were unsure about Obama’s sincerity and credibility. Many were also concerned that Obama’s solutions all required spending money.