Duchess Kate and Pippa Middleton are spotted while watching the Wimbledon Lawn Tennis Championship in London. 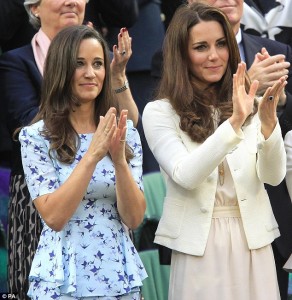 The Duchess of Cambridge took her younger sister to the royal box for Day 13 of a tennis match. They were wearing sunglasses and shared few giggles for the Men’s Single finals where Roger Federer beat Andy Murray to win a record-tying 7th Wimbledon championship on Centre Court. Meanwhile, Prince William is busy with the prior commitment in Wales.