Duchess Kate and Prince William were spotted at the “War Horse” UK premiere as guests of honour. 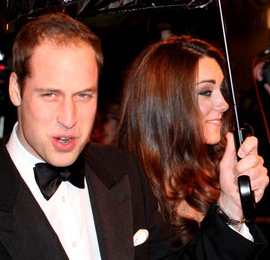 The Duchess of Cambridge was sporting black lace and nude creation by Alice Temperley with a plunging neckline and fishtail while her royal husband looked handsome in his suit and shielded her with umbrella. The premiere was being held in aid of the charitable Foundation of Prince William and Prince Harry, of which Kate is a patron. Meanwhile, the couple met members of the cast including Jeremy Irvine, Benedict Cumberbatch, David Thewlis, Emily Watson and Steven Spielberg.