Elisha Cuthbert, an actress, was almost killed during a recent visit to New York City, when she walked into oncoming traffic on a busy road without looking. 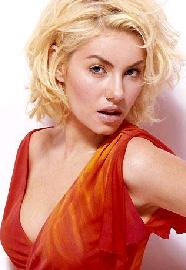 The “24” star was hit by a car and thrown across the street and was convinced she was going to die.

Elisha Cuthbert revealed, “I almost got killed. We’re walking along the street and I’m an idiot because the light turns green and a van screeches (to a halt). I walked past the van and realized, ‘Oh my God, I’m in the middle of an intersection and they’ve got a green light and I decided to cross.’ As soon as I pass the van, a Mercedes Benz is about to clip me in the knees, and I’m like, ‘I’m about to die.’ ”

She added, “So all of a sudden you freeze and think to yourself, `Can I outrun it? No. Am I going to break my legs? Probably.’ And what do I do? This is so cool of me because you realize the kind of person you are. I leaped up onto the car and I bounced and I flew all the way across the intersection. And I land right on my butt in the middle of the intersection. ‘Am I dead? No I’m not dead. Do I have any bones broken? No. Purse still intact.'”