Elizabeth Hurley, who was given the royal seal of approval yesterday, showed her bikini designs to Prince Albert II of Monaco. 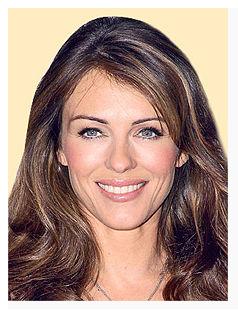 Proving Cannes wasn’t the only glamorous place on the French Riviera this week, Elizabeth Hurley and a host of celebrity friends joined the monarch for a fashion show.

Attending with her husband Arun Nayer, Elizabeth Hurley had the prime location sitting in the front row beside the leader of the principality.

The “Austin Powers” actress showed off an impressive cleavage in her plunging Azure gown, which clung in all the right places around Elizabeth Hurley’s shapely figure.

The fashion show provided Hurley with a chance to show off her Elizabeth Hurley Beach collection to Prince Albert, who looked impressed with the series of colorful bikinis.

Wearing killer black platform heels, supermodel Naomi Campbell towered over Ecclestone as she bent down to give the racing tycoon a kiss.