Ellen DeGeneres and Portia de Rossi know how to double their fun! 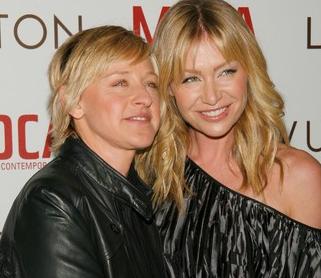 The couple celebrated their birthdays with a joint bash at their Beverly Hills house Saturday, according to a report.

The party kicked off around 8 p.m., with many guests partying in the backyard, where deejay Samantha Ronson, who brought along girlfriend Lindsay Lohan, spun her own mix for the birthday pair.

According to a partygoer, “This is their first big party together as a married couple. [Ellen] and Portia seem very excited to have all their friends here.”

Earlier in the week, the happy couple celebrated DeGeneres’s 51st birthday at the Chateau Marmont in Hollywood.