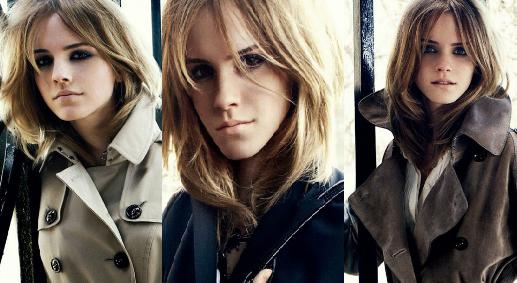 With dark, smoky eye-make up and windswept hair, Emma Watson looks a far cry from the young Harry Potter heroine Hermione Granger in her latest incarnation as the “face” of British fashion label Burberry.

The 19 year-old actress confirms a sophisticated and grown-up look in the images, as she models signature items – such as the classic trench coat and accessories, adorned by the iconic Burberry check, from the heritage brand’s forthcoming autumn/winter 2009/10 collection.

Watson, who is carving out a figure as a leading style icon – caught the eye of Burberry’s creative director, the Yorkshireman Christopher Bailey, who said: “Having known and admired the lovely Emma Watson for some time, she was the obvious choice for this campaign. Emma has a classic beauty, a great character and a modern edge. Her charm and intellect and brilliant sense of fun made the whole shoot feel like a picnic on the Thames.”

The advertising campaign, which was shot by celebrated fashion photographer Mario Testino and directed by Bailey, was set in Westminster, central London, home to Burberry’s new global headquarters at Horseferry House, SW1.

In one image, the River Thames is clearly visible in the background, conveying what Bailey calls a ‘wonderfully historic part of London’ to reflect the rich history and modernity of the Burberry brand.

Last month, the label announced that it will show its Burberry Prorsum collection for spring/summer 2010 as part of London Fashion Week in September – forsaking Milan Fashion Week where the brand has shown for the past eight years.