Emma Watson, who plays Hermione Granger in the Harry Potter films, has said she plans to take a three-year break from acting. 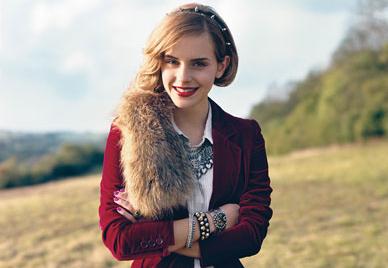 The 19-year-old actress is due to start an English and Art course at university in September and wants to enjoy her time as a normal student, away from the pressures of fame.

The starlet, who recently featured in a Burberry advertising campaign in an attempt to shed her geeky on-screen persona, will step back from acting when she has completed work on the final Harry Potter film.

Watson is currently promoting Harry Potter and the Half-Blood Prince, which is out in July, while finishing off work on the Deathly Hallows I and Deathly Hallows II, the two films that have grown out of JK Rowling’s last book in the series.

“I want to forget about hair and makeup,” she said in an interview with The Times. “Sometimes on a publicity tour I can’t remember what time it is, what country I’m in.

“Now it’s coming to an end I’m trying to hold on to it. So I have a book, and everyone I’ve met has a page. I want to remember them and not just be left with the media version of what happened to me.”

The teenager is keeping her choice of university secret in an effort to avoid press intrusion, although internet gossips have suggested that her destination could be any one of Harvard, Brown, Yale – all in the US – and Cambridge.

“We did it two weeks ago,” she said. “Four takes one way and two takes with the camera in the other direction. Six takes altogether.”

In the interview Watson also picked out Helena Bonham Carter, who played Bellatrix in Harry Potter, as the biggest influence on her career. The pair struck up a friendship after Bonham Carter invited the teenager to her house to discuss their scenes.

“I admire her so much, she is so confident in herself, so happy,” she said. “She probably has no idea how important those two or three hours with her were to me.”

In the end, she has come out of the Potter tunnel alive and well. It has been a most peculiar education. Watson has suddenly realised this and confesses that she is writing everything down. “I wasn’t aware of it at the time, but now it’s coming to an end, I’m trying to hold on to it. So I have a book, and everyone I’ve met has a page. I want to remember them and not just be left with the media version of what happened to me.” She pauses. “I don’t want to ever forget the way I feel right now.”