Gisele Bundchen, who is the world’s richest supermodel raking in $33 million a year, has posed some sexy pictures for GQ Magazine. 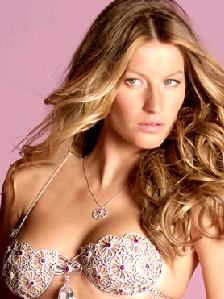 The supermodel has posed wearing a stunning silver bikini and added a very classy black outfit.

As for the other news, the Brazilian model topped Forbes magazine’s list of the 10 richest supermodels, earning almost four times more than Kate Moss, who is in second place with an annual income of $9 million.

You could see her picture in the magazine here.

She, who recently turns 27, stars in almost 20 campaigns a year and was the lead model for lingerie giants Victoria’s Secret.