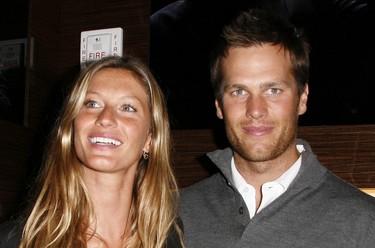 The ceremony — which began at dusk — was “very small and intimate,” a source tells Us, adding that guests mostly consisted of immediate family. Brady’s son with ex-girlfriend Bridget Moynahan, John Edward Thomas Moynahan, was also present.

(Fitting, as Bundchen once described her ideal wedding as “a simple ceremony…I don’t like parties, I prefer something more intimate, just for the closest people.”)

Representatives did not immediately return calls.

The Brazilian-born supermodel has been dating the New England Patriots quarterback, 31, since 2006.

A pal close to the couple revealed Bundchen and Brady are perfect together, saying: “She’s definitely ‘The One.’ She really makes him comfortable and just happy.”

Engagement rumors began to surface about the couple late last year. First, TMZ announced Brady popped the question Dec. 24 on a private plane, then People claimed they planned to wed in Costa Rica.

Bundchen, however, slammed both reports as false as she said last month after receiving over 100 e-mails from pals asking about the engagement: “Someone deduced I was getting engaged…I don’t know how people are so creative.”

The couple purchased an $11.7 million plot of land in a gated community in the Brentwood neighborhood of Los Angeles late last year.