Kate Middleton is now flaunting her impeccable style so that she can be able to keep up with Meghan Markle’s image. 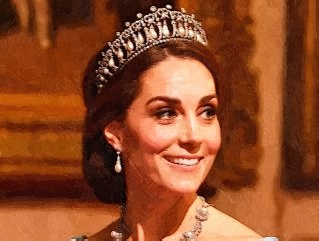 The royal sources reveal the scoop that the Duchess of Cambridge is paying more attention to her wardrobe, hair, jewellery and makeup while attending more events. It seems that the 36-year-old royal wants to be more visible now that the “Suits” star is in the spotlight. It was obvious that she totally changed her look for a recent state banquet, where she combined Princess Diana’s favourite tiara and a fancy necklace to complement her new gown by Alexander McQueen. Meanwhile, Duchess Kate was in the center of speculation, which suggests that there was a tension between her and Meghan Markle as well as between Prince William and Prince Harry. No comments were made from Kensington Palace.