There is a speculation that Jaime Pressly was the nude body double of Drew Barrymore in the 1996 film “Poison Ivy 2.” 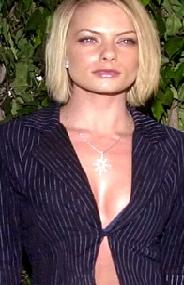 Jaime Pressly dismissed the speculation and insisted she was never a naked stand-in for Drew Barrymore, the star of 1992’s Poison Ivy who didn’t actually appear in the sequel, and blames the confusion on a flashback sequence.

She revealed in Playboy magazine, “Drew plays Ivy in the first Poison Ivy film, and in Poison Ivy 2 Alyssa Milano plays the art student who moves into Ivy’s old room in a house with other students. She finds a diary and pictures of Drew’s character in a closet. The pictures are supposed to be of Drew, but they’re of me, though you never see my face. When Alyssa reads Ivy’s diary – Drew’s diary – she imagines her, but instead of Ivy being Drew, she’s me. People say I body-doubled her and it was my boobs and my ass in the movie instead of hers, but that isn’t the case. I haven’t had a body double myself, but I’m not opposed to it.”