Jennifer Aniston and Justin Theroux was having a sweet moment in the photo, which was taken by photographer Terry Richardson. 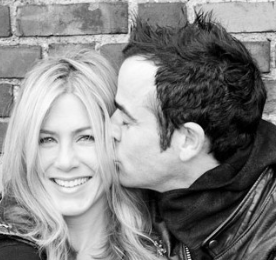 The couple posed in a series of shots for the photographer, including the silly and romantic shots. Meanwhile, Elle magazine recently named Jennifer as one of Hollywood’s most celebrated women. She will be honored at Women in Hollywood Event next month at the Four Seasons Beverly Hills Hotel.