Jennifer Aniston, who graced the cover of April 2009 issue of Elle magazine, has said she has “no regrets” as she refused to be drawn into a discussion on her divorce to Brad Pitt in a recent interview. 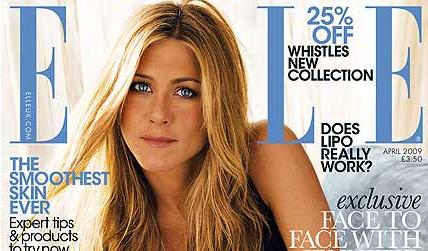 In London to promote her new movie Marley & Me, she said she felt “better than ever”.

Rather than the “funny, quirky, pretty roles” she usually gets offered, she said she would enjoy being the next Bond girl, saying: “I’d love to do an action move. James Bond! Glamour! Daniel Craig! ****-loads of fun!”

Speaking about her new film, a tear-jerking story about a destructive Labrador, co-starring Owen Wilson, she told ELLE Magazine: “What’s great about this movie is that it’s a true story. It’s not pretty. It’s about the reality of a marriage. It’s a portrait of those moments, which everyone has, where you hit a snag. People go to Mach 5 – “We’re done! This is over! We can’t recover!” – when, in fact, it’s beautiful. I think breakdowns equal breakthrough. You go further.”

* The full interview appears in the April Style issue of ELLE, on sale Wednesday March 4.