Less than two weeks to go before she celebrates her 40th birthday, Jennifer Aniston is continuing to give her on-again, off-again, on-again romance with John Mayer one more try. 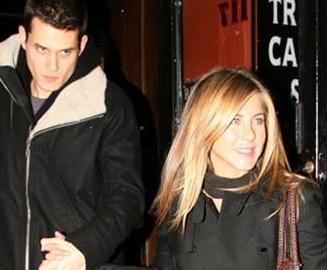 Jen’s overnight visit from her 31-year-old rock-star boy-toy lasted until around 2:30 PM on Saturday, when he was driven back to his bachelor pad in nearby Pacific Palisades.

Perhaps John was still a bit sleepy because on the return trip, he was lying down under a blanket on the floor of a Cadillac Escalade limo.