Jennifer Hudson bounced back from her family tragedy with a powerful rendition of the National Anthem at Super Bowl XLIII in Tampa, FL, on Sunday, February 1. 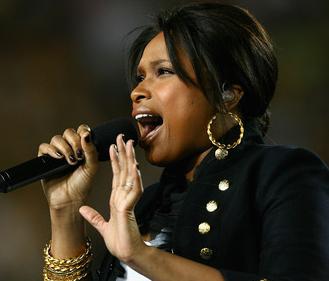 Jennifer, 27, appeared pensive but resolute before the stirring performance. Hudson took a deep breath and surveyed the field before launching into her rendition of the National Anthem. She ended the song with her head tossed back and a clenched fist raised to deafening applause.

Faith Hill sang America the Beautiful before Hudson took the field for the pre-game show during which the crew of flight 1549 (Miracle on the Hudson River) was also honored.

William Balfour, estranged husband of Julia, was arrested for the first-degree murders.

Balfour, pleaded not guilty to murder charges on Jan. 20.