Jessica Alba, who recently graces the cover of GQ magazine, insists the first thing she looks for in a guy is brains not good looks. 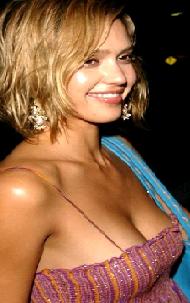 The actress, who is dating producer Cash Warren, revealed, “I don’t really have a type as such. Intelligence, kindness, a sense of humor – that’s kind of it for me. I don’t really care that much about the physical. I see all the pretty boys
I want when I’m working. I’d much rather have a great conversation with
someone.”

The “Fantastic Four” star has also taken a swipe at her fellow actors, insisting many Hollywood stars take themselves too seriously. She added, “It’s a trap for actors to think they’re the center of the universe. I’ve never been that impressed with myself. I really don’t think about it.”