Jessica Alba, who is currently promoting “Fantastic Four 2”, said that she doesn’t take notice of the image surrounding her. 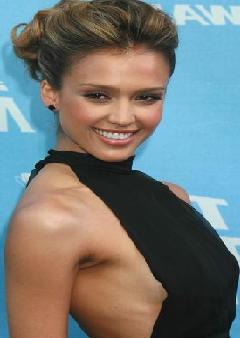 The actress revealed, “I don’t really pay attention to all that. It’s only when people start to treat me like one that it really freaks me out. Most days I wake up and look in the mirror and go, ‘ugh.’ I don’t really think I look all that great.”

Jessica Alba added, “I never want to be in the papers except when I’m promoting a movie, but if they have to, they’ll make up lies about me just to have something newsworthy to say. The more controversial the story is, the more buzz it can get, and the more it’ll sell.”

As for the photographers who hang around, the actress continued, “I could give two sh*ts about them. They’re so lame, I can’t even believe that’s a real job. I can’t imagine they even pay taxes.”

The actress also revealed that she prefers chilling in her house. She said, “Sometimes I like to go out, but usually after work I just go home, take a bath, watch movies. Instead of going out, I’d rather have my friends over and play games at my house-stupid games like charades or Pictionary or Monopoly.”