Jessica Alba, who showcased her fantastic belly button ring as she worked on her tan in Florida, had the opportunity to bare it all for “Sin City.” But the actress deliberately opted to stay confined in those tight cowboy chaps. 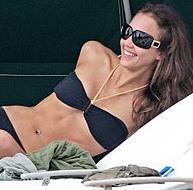 The 26-year-old actress revealed, “Nudity was absolutely an option. Obviously it would have been more authentic if she was bottomless and topless [like in the comic], but I felt like dancing around with a lasso and chaps was sexy enough. Being nude, for me, would have been too distracting. Plus, I don’t know what my dad would have done. He might have disowned me.”

As for the movie, Jessica Alba described the experience of shooting of the film as unlike anything else she has ever done, saying, “I felt like I was a little piece of this orchestra. It was so visual and overwhelming. It was just beautiful from beginning to end.”