Jessica Biel has lavished praise on co-star Adam Sandler for being a “total gentleman” while fondling her breasts on set. The pair appear together in new movie I Now Pronounce You Chuck & Larry. 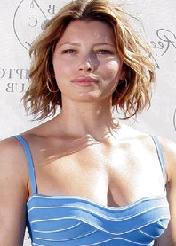 The actress, who is currently dating Justin Timberlake, admits she was nervous ahead of an intimate scene with Adam Sandler.

But she discovered, “It was great! I know it sounds weird – it was a little bit uncomfortable at first being in my underwear in front of everybody, but after I did it once it was no big deal. And Adam was a total gentleman about it.”

The actress recently denied any sexual chemistry between Adam Sandler and herself, or her other co-stars such as Kevin James, Dan Aykroyd and Steve Buscemi. She revealed, “All of the guys became my ‘older brothers’ – they picked on me every day! When you’re the only girl there’s no competition – you’re just one of the guys.”