Jessica Biel, who recently began dating Justin Timberlake, has rarely off the cover of gossip magazines. 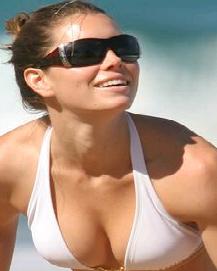 The actress revealed, “You have to have a sense of humor about anything that has to do with silly magazines. Honestly, I look at a magazine and they know more than I did. I had no clue this or that was happening. It’s so funny how it really has become such a crazy, crazy world. You really do just have to laugh at everything.”

The actress added, “It’s definitely difficult and sort of bizarre to deal with. You do really have to just get into a place where you feel Zen about it. You just have to take a deep breath and know that somebody is going to be taking your picture while you’re going to the laundry and picking up your dry cleaning. You don’t understand why somebody cares but they’re there. So you just go about your day and ignore them. That’s the best way to deal with it.”