While Tony Romo is reveling in his renewed membership to the Singles-R-Us Club, Jessica Simpson is having a hard time coming to grips with being dumped a day before her 29th birthday. 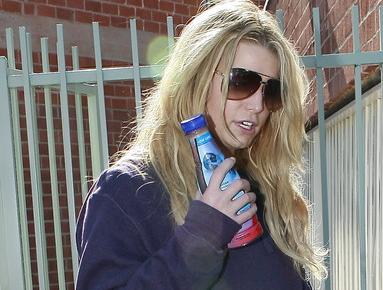 “Jessica was really blindsided,” says a Simpson family friend. “She’s sad, mad, and confused. Her emotions are all over the place.”

Another source close to Simpson tells PEOPLE that “it’s been difficult lately” for the pair, who first started dating in November, 2007.

“Dating her comes along with her celebrity and press – that’s not easy for anyone,” says Simpson’s family friend. “But she and Tony seemingly had it figured out. They rolled with the punches and focused on each other. They just lost sight of that at the end.”

Since the sudden split, Simpson has been laying low. “She is holding up okay,” says the Simpson source. “She is with her family. They are – as always – very supportive of her.”

The one thing the family will not support: The thought of Simpson reconciling with her ex-husband Nick Lachey, who recently split from his girlfriend Vanessa Minnillo. “It won’t happen,” says a source. “They have no respect for him. Jessica has no respect for him. There is way too much bad blood between Nick and Joe for Jessica to even think about it.”

The Simpson clan, however, was upset to see Romo go. “Everyone really liked him,” says the Simpson family friend. Adds another source close to the Simpsons: “He wanted this perfect mold of the perfect football girlfriend. People don’t realize that Jessica has been worn down by Hollywood. She has insecurities and inner demons that she struggles with. She’s not some upbeat blond cheerleader that people want her to be.”

But Simpson is, if nothing else, strong. “She’s gone through heartache before,” says a source. “She wants someone who is on the same page that she is. If she has to move on for that, she will.”