Justin Bieber managed to leak footage from the making of “Under the Mistletoe.” 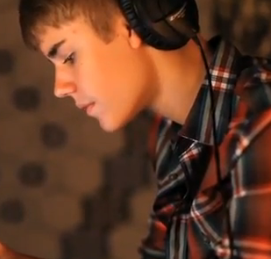 The “Baby” hitmaker, whose single with the same title will be released tomorrow, also gave a snippet from his cover of “Santa Claus is Coming to Town.” The full “Under the Mistletoe” album, which features collaborations with Mariah Carey, Boyz 2 Men, and Usher, will be released on November 1.