Kate Hudson is still wearing real fur, including fur-lined boots and a shearling jacket, on Saturday in Aspen even after being named on PETA’s worst dressed list for 2010. 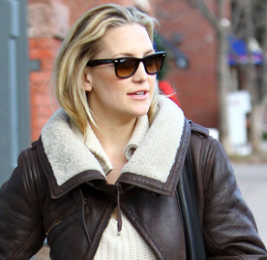 The actress was spotted making last-minute shopping with J. Crew goods. As for wearing fur, PETA claimed that her fur habit is the reason why A Rod ran for home, according to the animal rights group’s press release for last year’s worst dressed list.