Kate Middleton, who has long held court over London’s party scene, braved yet another early morning for her regular session on with her team. 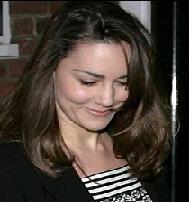 The 25-year-old brunette, who has kept up her social life with numerous visits to hotspot Mahiki despite the vigorous three day a week training scheduled, is preparing to take part in an all-woman record-breaking attempt next month to row across the Channel.

Emma Sayle, her teammate, praised Kate Middleton’s ability. She revealed, “It’s a tricky job, like standing on a wobble board in the gym. But Kate’s very gifted and capable – she’s not on the team as a token celebrity. She’s fitted in well as she’s such a nice down-to-earth girl.”

“The Sisterhood”, which is the name of their team, with members that describe themselves as “an elite group of female athletes talented in many ways, toned to perfection, with killer looks and on a mission to keep boldly going where no girl has gone before”.

Added to the controversy, it has been revealed that Emma Sayle is the founder of Killing Kittens, a firm that organizes sex parties for wealthy couples.