Kate Middleton appears to be on the verge of becoming a victim of the size-zero debate. 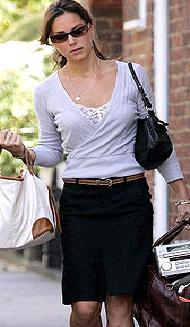 Reports claim that the brunette’s figure is shrinking fast, as she is European size six, just one size above an American zero.

A friend revealed, “Kate has lost a lot of weight recently and was sent a whole new wardrobe from the appropriately named Queen label. Kate asked for size six. She is tiny, with no hips, and has been complaining lately about lacking curves.”

A friend also revealed that cigarettes help Kate Middleton shed the pounds, saying, “She enjoys the occasional cigarette, which suppresses her appetite, but is trying to give up as [Prince] William hates it.”