Kate Middleton, who is the girlfriend of Prince William, has caused outrage after being caught using her mobile phone while driving. 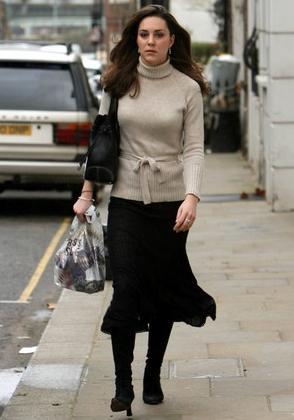 The 26-year-old brunette beauty was pictured holding her handset to her ear as she drove her Audi A3 along a country lane near her family’s Berkshire home.

Prince William’s girlfriend was seen in her vehicle clutching the device to her ear, which is illegal in the UK, as she drove down a country lane.

An eyewitness revealed: “She seemed to be going quite quickly. And you could quite clearly see she was on the phone. It is not exactly a busy road but it’s narrow in places and you need to concentrate because you never know what’s around the next corner.”

If Kate Middleton had been spotted by police she could have been fined £60 and received three penalty points on her license. She could even have been jailed if she had caused an accident.

Roger Vincent, spokesman for the Royal Society for the Prevention of Accidents, slammed the 26-year-old brunette beauty for her irresponsible behavior.

He revealed: “Using a mobile phone while driving is extremely dangerous and has cost numerous lives. Drivers are four times more likely to crash if they are on their mobiles. People get sucked more and more into conversations and less on what is going on around them on the road.”

He added: “Even though you think you are in control you are not going to be able to react as quickly to the unexpected. We would urge Kate Middleton, and others, to realize the misery that is caused. It’s extremely sad, not matter who it is, that people are not getting the message.”