Kate Middleton’s famous cream-colored blouse, which was worn during her engagement portrait, became available to the public again. 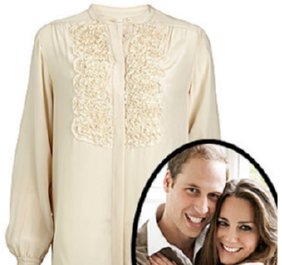 Since the original blouse that the bride-to-be bought from the fall 2008 collection was already purchased on sale, it was no longer available in stores. Now, the blouse was reissued due to popular demand and it has been officially named the Kate Blouse and increased in price to $203 from the original selling price of $155.