Katie Holmes, who is fresh off her run in Broadway’s “All My Sons,”
graced the cover of the April issue of Glamour magazine as she talked about motherhood, marriage and her limited cooking. 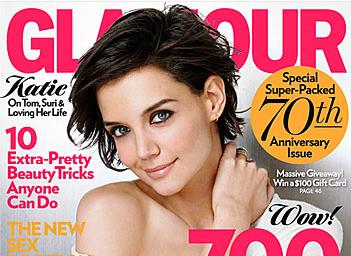 On the rumors that followed Suri’s birth: “Some of the stuff [people said] was such absolutely horrible things to say about a child… It was so uncalled for and so disgusting. Enough is enough.”

Asked what she wants to say to the people who spread rumors, Holmes remarks, “Sometimes I think I would say, ‘Why don’t you come over and have dinner? See what there is to see.'”

On motherhood: “Becoming a mother has been the most amazing experience–in an instant you become strong. You have to be a little bit wiser; it’s the most important job you have in the world… We like to be together, so we use the house for our [business] meetings. [We] play Yahtzee, board games, Scrabble. We grill; have pool parties. We play ‘The Three Little Pigs’ and Suri is the Big Bad Wolf. [Tom] reads story books to Suri and we all laugh. When a good song comes on, he’ll break into dance. We’ll watch movies in bed–recently Madagascar and Cinderella, for Suri. We have a really good time.”

On Suri: “She’s really such a special girl — strong and funny. She’s her own person. She has a great sense of humor.”

If Suri knows that she has famous parents? “She does. [If] Tom or I are on TV, we’ll watch it. And when we were in New York, we would see a lot of Valkyrie posters. She goes, ‘Look! There’s Valkyrie movie!'”

On her career: “Acting—I want to do it all. Bad girl, good girl, complicated girl. Aren’t we all complicated?”

On gossip: “We were changing diapers. [Tom] said, ‘I don’t want you to get upset,’ And I said, ‘Well, I am upset.’ So we approached it together. But I definitely felt like—as a woman, as the mother of Suri—I want to handle this! My mom is very strong, and if anyone ever said anything about any of us, she would be, ‘Excuse me?’ That’s my family!’”

On cooking: “I don’t really cook that much–eventually I will. I do make cupcakes. And [Tom] makes his pasta carbonara for me. He knows exactly how to do it: a pinch of this, a pinch of that. He has a recipe, but he also kind of [improvises] by himself. You have to do the egg at a certain time. He did it once when we were camping.”