Kyla Ebbert, who hit the controversy for an earlier airline flight where she wore a very short skirt and a very low cut top, has uncensored photos from Playboy, which were already leaked online. 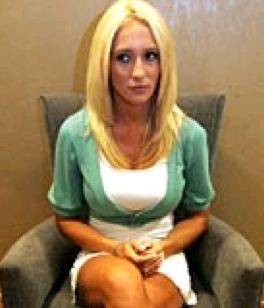 The Hooter’s waitress from San Diego, who many say “wasn’t” dressed inappropriately on the South West air flight, has posed for Playboy magazine. Her controversy grabbed the interest of the men’s magazine and now Kyla Ebbert is taking full advantage of her cleavage and her opportunity.

The link to the new uncensored photos are here. As you click through they will obviously not be conservative since they are the actual Playboy photos.

The photos of Kyla Ebbert are already online at Playboy along with a video but you have to be a member to view them. But as the World Wide Web turns the full-uncut version has already been leaked.