Lindsay Lohan, who is wearing well-worn leggings, ballet flats and loose-fitting dresses have been staple wardrobe items in recent times, but the actress proved on Tuesday she’s still a glamour girl at heart. 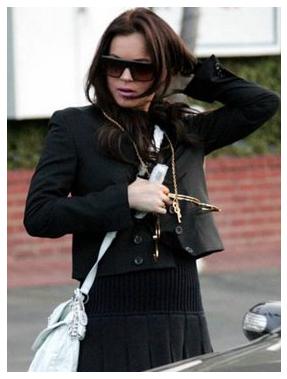 It was an impressive transformation for Lindsay, who had arrived just two hours earlier in dressed-down tights and billowing cobalt blue top.

The star was once again in dazzling form yesterday, when she arrived in a plunging gown at the opening of a newly refurbished Fendi store in Rodeo Drive.

The troubled 21-year-old is slowly emerging back on Hollywood’s social scene after a leaving rehab six months ago.

She is now living a quieter life, saying recently: “I like having friends around me, but now I’d much rather be at home.”

Still, she hasn’t completely given up her penchant for partying, adding: “That’s not to say I’ll never go to a club again, because I’d be lying.”