Lindsay Lohan showed off a little extra skin on Twitter. 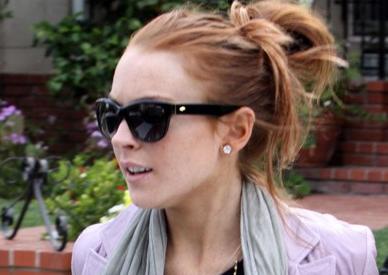 On Monday, the actress, 22, posted a topless photo taken from a January Fornarina shoot. (She’s the summer 2009 spokeswoman for the Italian clothing label). In the pic, her long, blonde hair covers her chest as she vamps for her BlackBerry camera.

It’s her second stunt this month.

On June 8, she sported what appeared to be a diamond engagement ring while traveling with ex Samantha Ronson — and teased on Twitter: “Great news to share!!”

Sources later confirmed that the former couple — who split in April after about two years of dating — aren’t planning a wedding.