Lindsay Lohan, who hit headlines with chasing a therapist for the Hollywood stars, smolders for the camera in an advertising shoot. 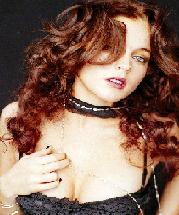 The “Freaky Friday” star is facing jail after being arrested for drink-driving and possessing cocaine just 11 days after leaving rehab.

To make the situation worse, critics have trashed her recent movie “I Know Who Killed Me” as one of the worst of the year.

But her worries melted away when she gazed into the lens for a Jill Stuart ad campaign.