Lindsay Lohan went to the exit way of Lynwood Correctional Facility after a bondsman put up the cash to release her. 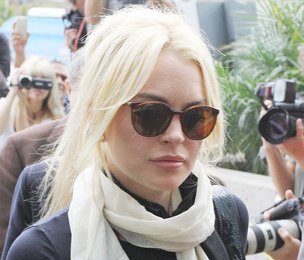 The “Freaky Friday” star was in custody for almost 5 hours and her bail was set at $75,000. Judge Stephanie Sautner previously sentenced Lindsay to 120 days in county jail for her probation violation. She will return to court on May 11 for her pre-trial hearing.