Lindsay Lohan, which has steamy scenes scared her father, graces the cover of Elle Magazine for its September issue. 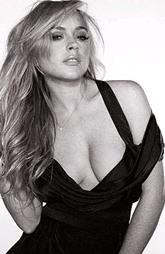 The “Freaky Friday” star posed for hot pictures in the magazine. In an interview, she talks about rehab, her vanity and the reason why she did not trust anyone.

There is also a speculation that Lindsay Lohan checked into rehab for the third time. According to a report, the actress will be undergoing a one-month intense program at Cirque Lodge drug and alcohol rehab facility in Utah.