Lindsay Lohan showed up at the set of a Los Angeles-based music video on July 13, where she guest starred as herself. 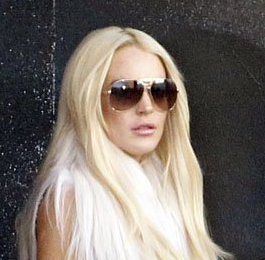 In one of the scene, the 25-year-old actress could be seen posing for a photo with an adoring fan before a swarm of awaiting paparazzi chase her to an awaiting car. Meanwhile, Lindsay was spotted with Spencer Falls last night. Sources dished that the pair downed numerous drinks at the bar before heading back to Lindsay’s Venice Beach pad.