Lindsay Lohan, who previously flashed something, seems in a chipper mood as she was spotted having lunch in West Hollywood. 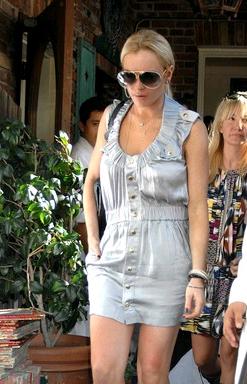 The actress, who wears silver minidress and black boots give an air of confidence, was seen visiting “The Ivy”, a trendy West Hollywood eatery with some friends.

The “Freaky Friday” actress, who looks like she is giving everyone a run for their money with her fashion choices and her partying ones, have begun community service at the Red Cross the day before.

Although she is gotten three years of probation for her alcohol-related convictions, Lindsay Lohan is taking things in stride. Post-rehab stints in Malibu and Utah, the actress is now facing the outside world with considerable strength.