Gemma Atkinson, who has taken the opportunity to show off her stunning body in a bid to re-enact the scene of Myleene Klass, went topless for Nuts magazine. 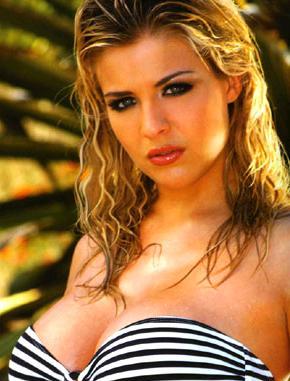 Gemma, who is “I’m a Celebrity” contestant, has stunning pictures for November issue of the said magazine, which you could see here.

As for the other news, the “Hollyoaks” star left little to the imagination in her skimpy print bikini as she bathed in the freshwater creek near camp. You could see her skimpy outfit here.

Her bikini look was reminiscent of TV presenter Myleene after she too regularly revealed her svelte physique in a white bikini on the popular reality show.

Gemma Atkinson, who once dated Manchester United star Cristiano Ronaldo, could be set to do the same and has already attracted male attention in the form of fellow jungle celeb ex-5ive star Jason “J” Brown with fellow contestant Janet Dickinson saying: “They make a great couple …. he’s besotted”.

Before coming onto the show, the actress claimed she wasn’t averse to the idea of romance but would definitely be keeping her clothes on.