Madonna paid tribute to Michael Jackson on Saturday night in the same arena where he was to stage his comeback, dancing along with an impersonator doing Jackson’s distinctive moves. 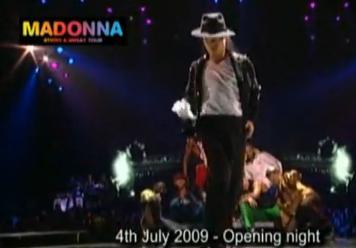 A picture of a young Michael Jackson appeared on stage while Madonna was performing “Holiday,” then the impersonator came on, wearing a sequined jacket, white T-shirt, white glove and white socks in the Jackson manner.

After the number, Madonna told the crowd, “Let’s give it up for one of the greatest artists the world has ever known,” and the crowd roared its approval.

The impersonator’s appearance would not have surprised anyone paying close attention to Madonna’s Web site, which had a picture of him dancing in rehearsal.

An estimated crowd of 17,000, including the fashion designer Valentino, turned out for Madonna’s concert, the first of two this weekend in London on her “Sticky & Sweet” tour.

In the last dance, Madonna and her dancers all donned jeweled gloves on their right hands in a simple tribute. Behind the stage some words from Jackson’s “Man in the Mirror” were flashed up briefly: “If you want to make the world a better place look inside yourself and make a change.”

Meanwhile, In an interview with The Sun newspaper, Madonna had said she was “terribly sad” about Jackson’s death.

“To be able to do what he did at such an early age was unearthly, everybody grew up in awe of him,” The Sun quoted her as saying.

“To work with him and become friends, and hang out with him, was exciting for me. I used to love picking his brains about musical stuff.”