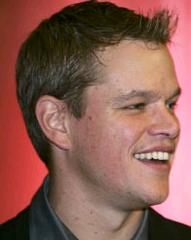 The Bourne Ultimatum star was spotted in Germany with acupuncture needles in his ear after a spasm in his neck.

And the actor reveals it was his young daughter who was the cause. He says, “My 14-month old daughter Isabella did me in – something no killer can.”