Miley Cyrus looks breathtaking in a Moschino Cheap and Chic nude silk cowl neck halter dress with a back ruffle as she arrives at the 2009 MTV Movie Awards held at the Gibson Amphitheatre on Sunday evening (May 31) in Universal City, California. 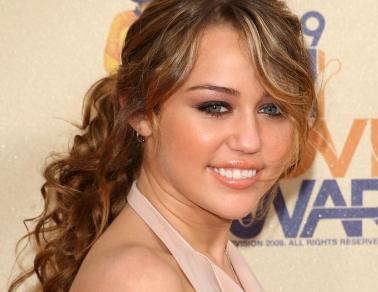 The 16-year-old starlet completed her look with Robert Lee Morris for Elizabeth and James jewels. Beautiful!

Meanwhile, Miley Cyrus enjoyed a day off on Saturday, May 30, going out for lunch with BFF Mandy Jiroux, attending a birthday party for elder sister Brandi and watching Teenage Mutant Ninja Turtles.

Miley is up for two Golden Popcorn trophies at the MTV Movie Awards tonight.

Her single The Climb (Hannah Montana: The Movie) won her a nomination for the Best Song From a Movie, a category in which she is competing against A.R. Rahman Jai Ho (Slumdog Millionaire) , Bruce Springsteen The Wrestler (The Wrestler) and Paramore Decode (Twilight).

“plllleeeasseee vote for me for the mtv movie awards! omgosh i am a nervous wreck 🙁 ahhh i need @mandyyjirouxx time,” Miley tweeted early this morning.