“Hannah Montana” starlet Miley Cyrus is spotted out and about in Los Angeles, California on Monday, March 23. Along with some friends, the 16-year-old actress stops for lunch at In-N-Out burger before heading to a studio apartment. 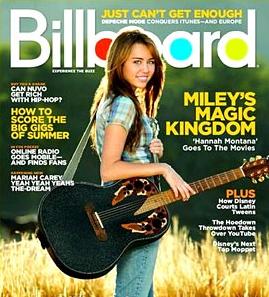 Covering the April issue of Billboard, the teen sensation opens up to the magazine about her new autobiography, her best friends and her upcoming film “Hannah Montana: The Movie”.

On her new book, “Miles To Go”: “It’s just an honor for people to be able to relate to me and my music—and not so much the character anymore. I can’t be Hannah Montana forever. I have to have something after this. I can’t do this when I’m 30.”

On the end of her TV series, Hannah Montana: “This movie was never meant to be the end of Hannah Montana. The thing is, a lot of people put where the show’s future lays in my hands—and it’s not up to me. It’s up to Disney and whether they want more episodes, and we hope that they do.”

On spending time with her best friends: “This is, like, the first time I’ve seen all my friends in seven months. It’s hard, man. With all the stuff that goes on with this business, I only want to do something if I absolutely love it.”