Miley Cyrus, who is the 15-year-old teen sensation, told the ET Online news that she felt so “embarrassed” with her daring picture that shows semi-topless in the new “Vanity Fair” magazine issue. 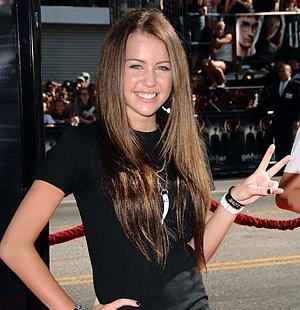 She revealed, “I took part in a photo shoot that was supposed to be “artistic” and now, seeing the photographs and reading the story, I feel so embarrassed. I never intended for any of this to happen and I apologize to my fans who I care so deeply about.”

The shocking photo revealed an interview with the “Hannah Montana” star and her father Billy Ray, and was snapped by the photographer named Annie Leibovitz. The promo included that they show Miley Cyrus sitting in profile with just a blanket wrapped around her chest.”

The “Vanity Fair” editors responded, “Miley’s parents and/or minders were on the set all day. Since the photo was taken digitally, they saw it on the shoot and everyone thought it was a beautiful and natural portrait of Miley..”

However, the “Disney Channel” spokesperson revealed, “Unfortunately, as the article suggests, a situation was created to deliberately manipulate a 15-year-old in order to sell magazines.”