Nicole Richie, who recently admitted that she was pregnant in the midst of pregnancy rumors, was seen in Soho yesterday. 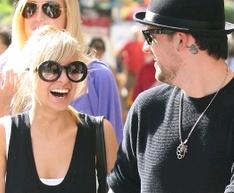 The former “Simple Life” star was having lunch with her boyfriend Joel Madden at The Kitchen at the Mercer Hotel.

The celebrity couple is expecting their first baby in January, there are reports that they are going to have a baby boy after Nicole Richie visited Los Angeles’ Cedars-Sinai Medical Center.