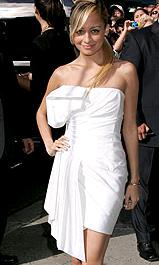 Kane, a morning show host of Hot 99.5, made the announcement at a party in Virginia, where Madden performed with his band Good Charlotte.

Following the set, Kane told guests, “He got engaged yesterday. Congratulations, Joel!” And despite receiving no reaction from Madden, the DJ is sticking to his story that he offered his congratulations to the rocker earlier in the night and “He said, ‘Thank you so much.'”

Kane added, “They’re very excited about the baby and the wedding. They want to keep their personal life personal.”