Nicole Richie and Joel Madden, who are expecting a baby due in January, got an early taste of parenthood by treating nearly 200 kids to an early holiday extravaganza. 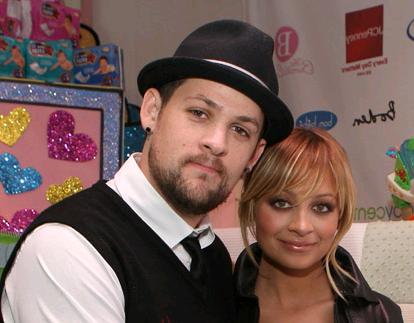 On a party thrown by the couple’s Richie-Madden Children’s Foundation at Paramount Studios in Los Angeles on Saturday, the “Simple Life” star revealed, “We really wanted to give these kids a really wonderful and special Christmas. It’s our favorite holiday.”

Playing Mr. and Mrs. Claus, they helped give away new pairs of Stride-Rite shoes and Cloud B Cuddle Cub teddy bears to children from Beyond Shelter, a program helping families combat homelessness and poverty. After a round of face-painting, balloon animals, and hot dogs, the kids rallied around Richie, who got the day’s loudest cheer when she sent out the tease, “Who wants to throw pies in Joel’s face?”

Joel Madden said, “It’s fun for us to be with a bunch of kids who are having a good time. They make you smile. Hopefully for today they’re feeling special. The foundation is really important to me [and] it’s really important to Nicole. We’re just really happy to be a part of the community and celebrating with these kids who haven’t been as fortunate as us.”

Breaking from the grandeur of her childhood days when she had “a Santa Claus and a reindeer” at her house every year, Richie is looking forward to a quieter yuletide experience as a mom-to-be. “It’ll be very boring,” she joked. Fresh from visiting his sister who recently gave birth to his “adorable” new niece Clementine, Madden echoed her sentiments: “It’ll be very low-key,” he said, “at home with the family.”