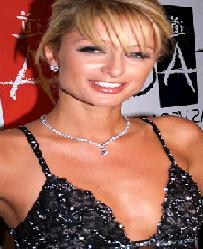 Christine Alexis portrays the heiress, who is ‘dominated’ by her cellmate Lucia (Adriana Sage) in a series of raunchy photos.

Meanwhile its been revealed the socialite’s promise to do more charity work following her release from jail is being carried out – the socialite has started work helping to raise funds for children with spinal cord injuries.

She was at Life Rolls On Foundation’s 4th annual Night By the Ocean auction on Sunday (22Jul) in aid of her close friend Jesse Billauer, a former professional surfer who founded the charity after he was paralyzed.